LOCAL – The Centre for Multicultural Pastoral Care operates under the Archdiocese of Brisbane‘s Evangelisation Brisbane. 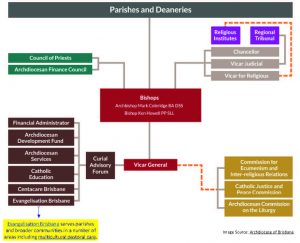 INTERNATIONAL – The Centre for Multicultural Pastoral Care keeps abreast with global issues affecting migrants, refugees and people on the move through the Migrant & Refugee Section of the Dicastery for Promoting Integral Human Development

We move with the times.

The Centre for Multicultural Pastoral Care (CMPC) has gone through a number of reorganisations within the Archdiocese of Brisbane.

In 1994, after 45 years, the Catholic Immigration Office became the Centre for Multicultural Pastoral Care (CMPC).  For ten years, CMPC operated as a direct service delivery agency under the Archdiocese of Brisbane’s Church Life and Mission and provided a welcome and drop-in Centre in Paddington for migrants, refugees and asylum seekers.

For nine years from 2004, CMPC operated under the Archdiocese of Brisbane’s Faith & Life.  Another major reorganisation in 2014 saw Faith & Life restructured into what is now known as Evangelisation Brisbane.

For many years, the government relied heavily on the Church to provide welcome, hospitality and settlement support to migrants and refugees.  For many years, the Church has led the way and provided creative and proactive models for welcome and resettlement of new arrivals.  As the government took on a more responsive role in  providing settlement services, CMPC ceased to function as a drop-in Centre but continued to be a conduit between the Catholic church and the wider communities on migrant and refugee matters.